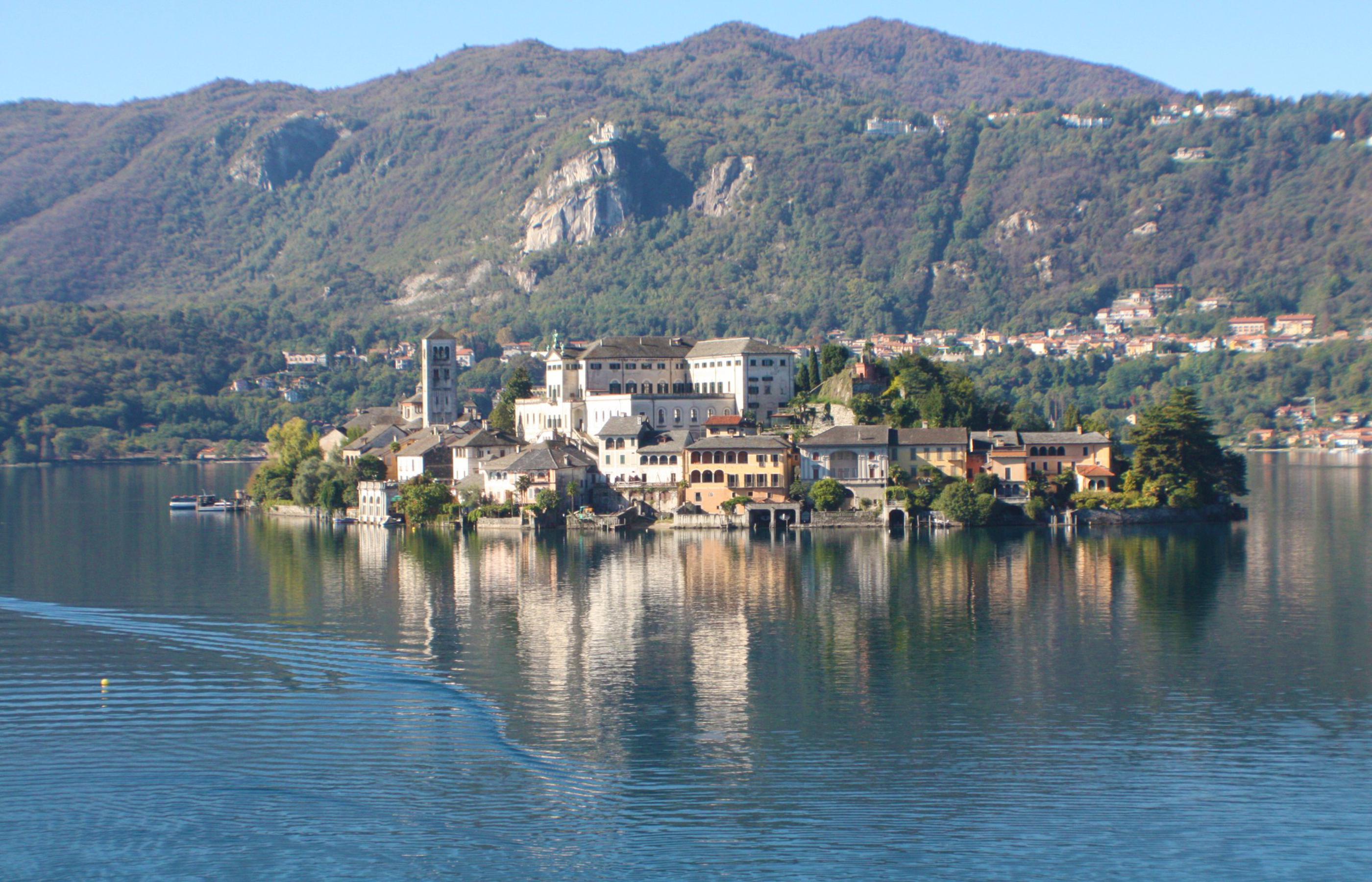 The island is small, but there are several things to visit and an enchanting ring walk that will make you discover very suggestive views.

Legend has it that this island was in the Middle Ages a rock infested with dragons. When in 390 AD, Giulio (who would later become Saint Julius) came to Orta, no boatman wanted to take him to the island for fear of the creatures that lived there. So he laid his cloak on the water, climbed up onto it, and he rowed with his stick to the rock. He drove away all the dragons and here he founded his hundredth church.

Only a dragon survived and took refuge in a cave in the Orta peninsula, from which it no longer came out. Legend has it that in this cave was found a dragon bone and still today hung above the table in the sacristy of the Basilica of San Giulio (this is not a legend, a bone is really in the sacristy!).

The population of the island probably dates back to the VI century AD. The church and the castle were comprised of several buildings located along a road traveled by pilgrims and merchants who came from France to Italy.

The island offered a strategic and defensive position. In the years 957 and 962, the castle suffers the attacks of the emperor Ottone 1st and his son Litolfo. Now the whole island is part of the “quoddam castrum videlicet insulam sancti iulii”.

Over the years the buildings have become more complex, including the residence of the Bishop, a small prison and the houses of the islanders.

THE CHURCH OF SAN GIULIO

Based on one or more previous churches, the current Basilica was built in the 12th century. The black marble of Oira, a quarry of Lake Orta, is used to make the ambo. The archaeological excavations conducted inside the building have highlighted the traces of a primitive basilica (V – VI century) in the form of a simple, small chapel with a single apse.

THE ROUTE OF SILENCE

Along the perimeter of the island there is a path called “of Silence and Meditation”. In this path you can meet some signs on which are written maxims that now relate to silence, now meditation. If, however, you follow the same path in the opposite direction, on the other side of the signs you will find writings that lead to meditation and inner reflection “Every journey begin near to you“, “If you can be yourself, you are everything” or again” Walls are in the mind “.

With the boats leaving from Piazza Motta, in every 15 minutes.

Every day, starting at 9.00 (the last travel time may vary, depending on the time of year).

The Sacred Mountain is always beautiful! But the most beautiful photos of the island will probably do in the morning when the sun lights it! Regarding the season, however, autumn is wonderful!

In summer, on the other hand, it is a cool refuge even on the sunniest days! Bring the snack though because there are no bars, for now.

A walk with amazing views, a bit challenging uphill at the beginning, but suitable for everyone.

The Basilica of the Island of San Giulio

An eternal diary that goes from the begging of the XVI Century to the end of the XVII Century, that how one can define the Basilica of San Giulio....