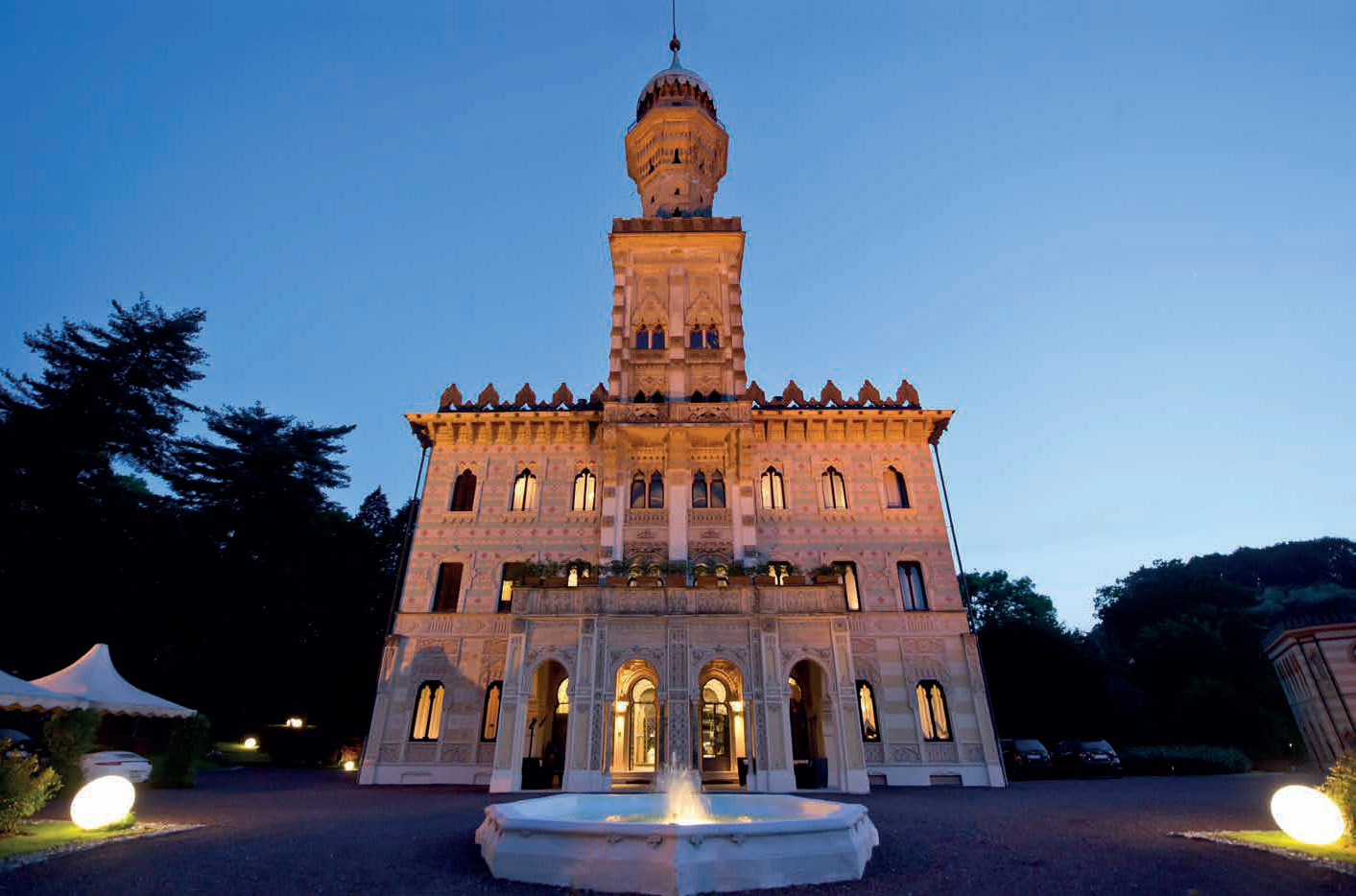 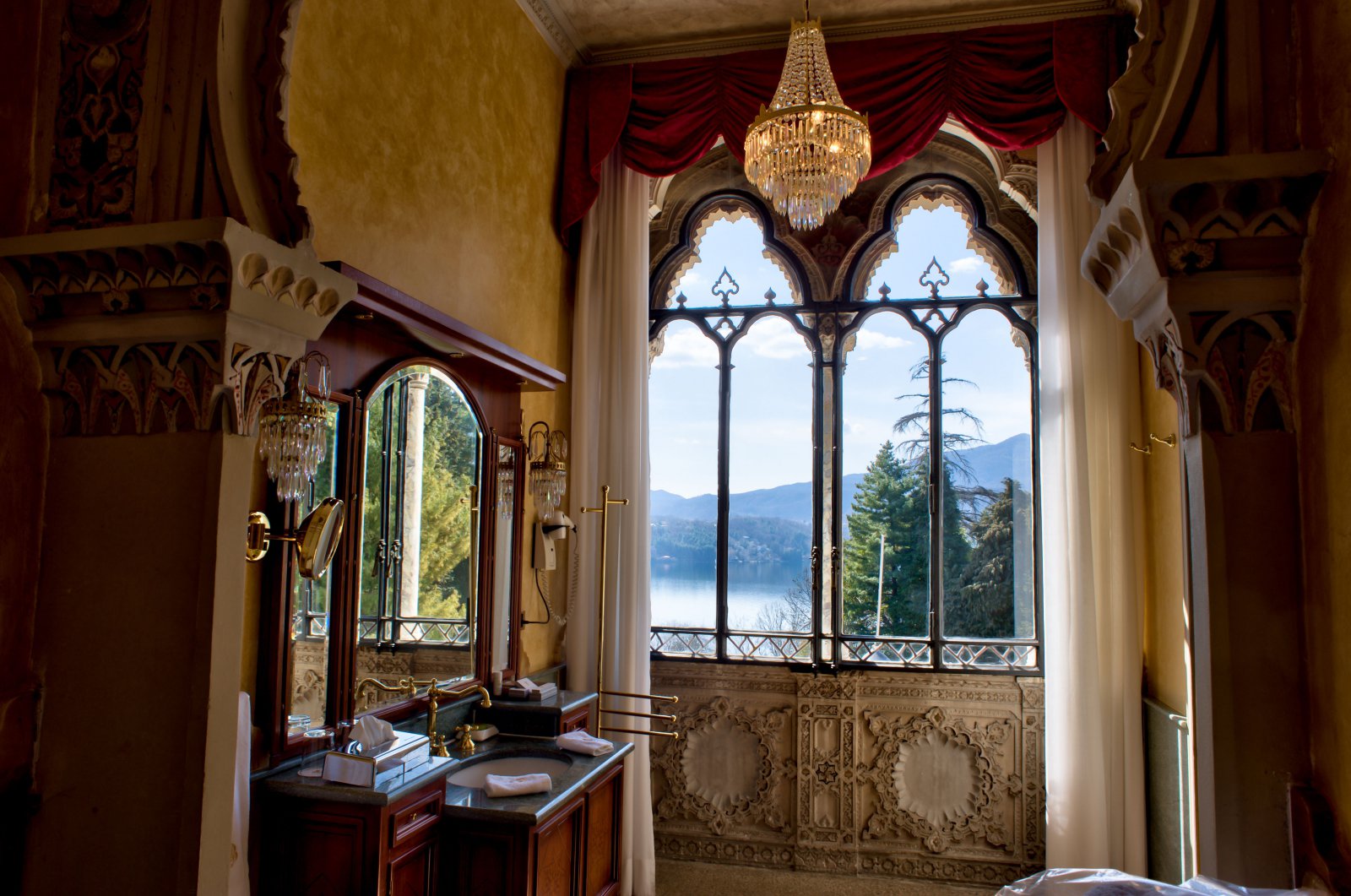 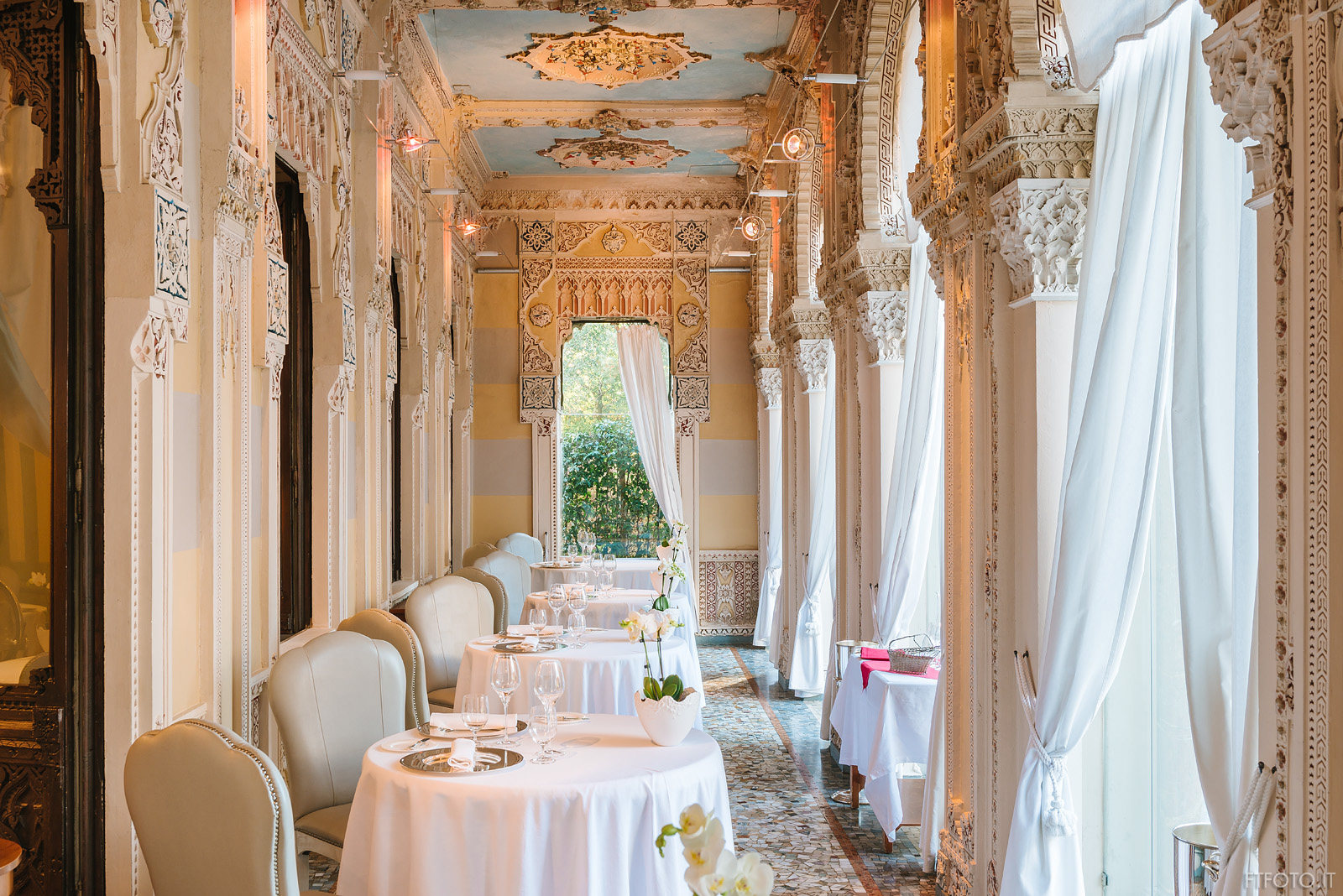 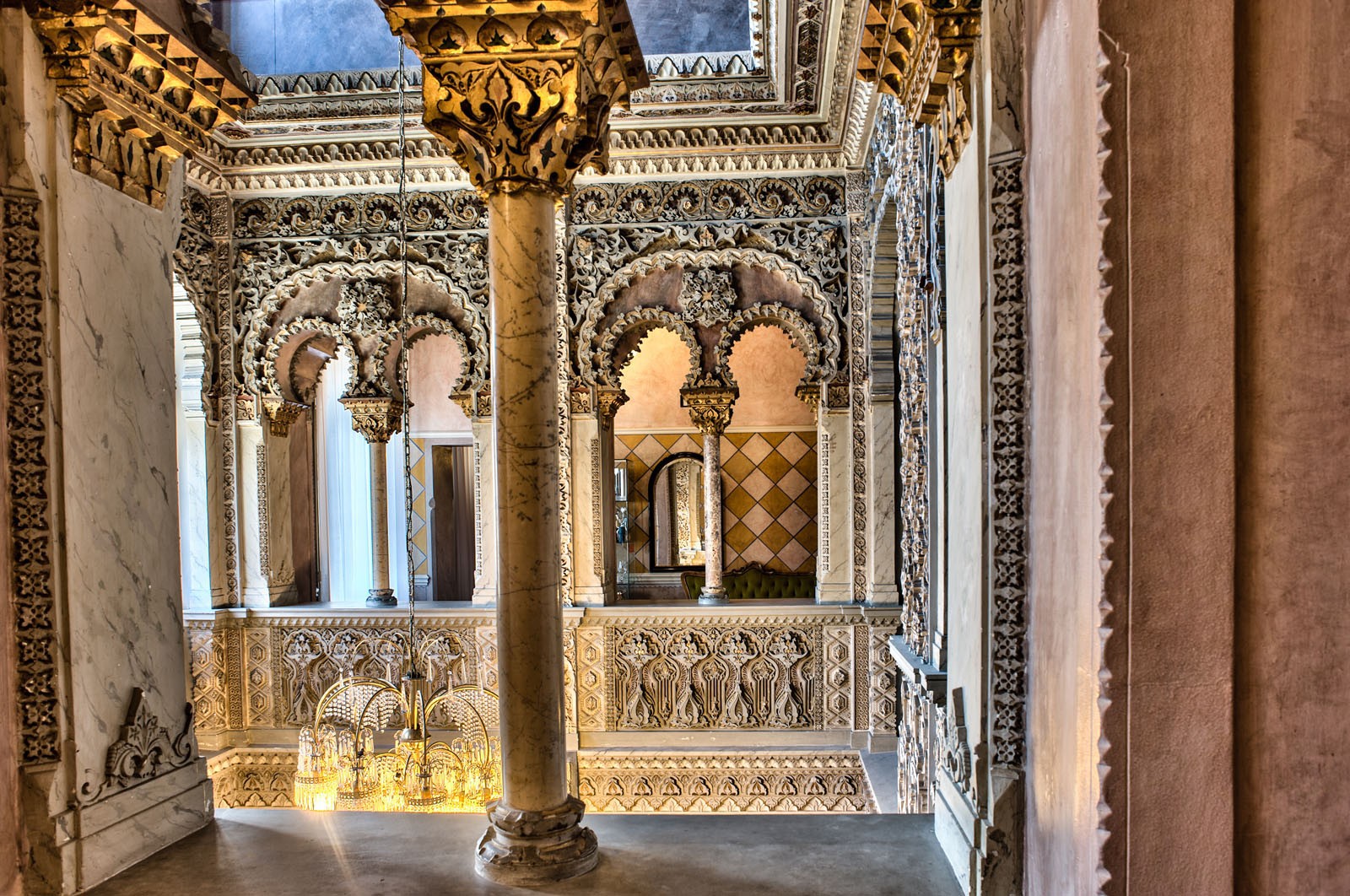 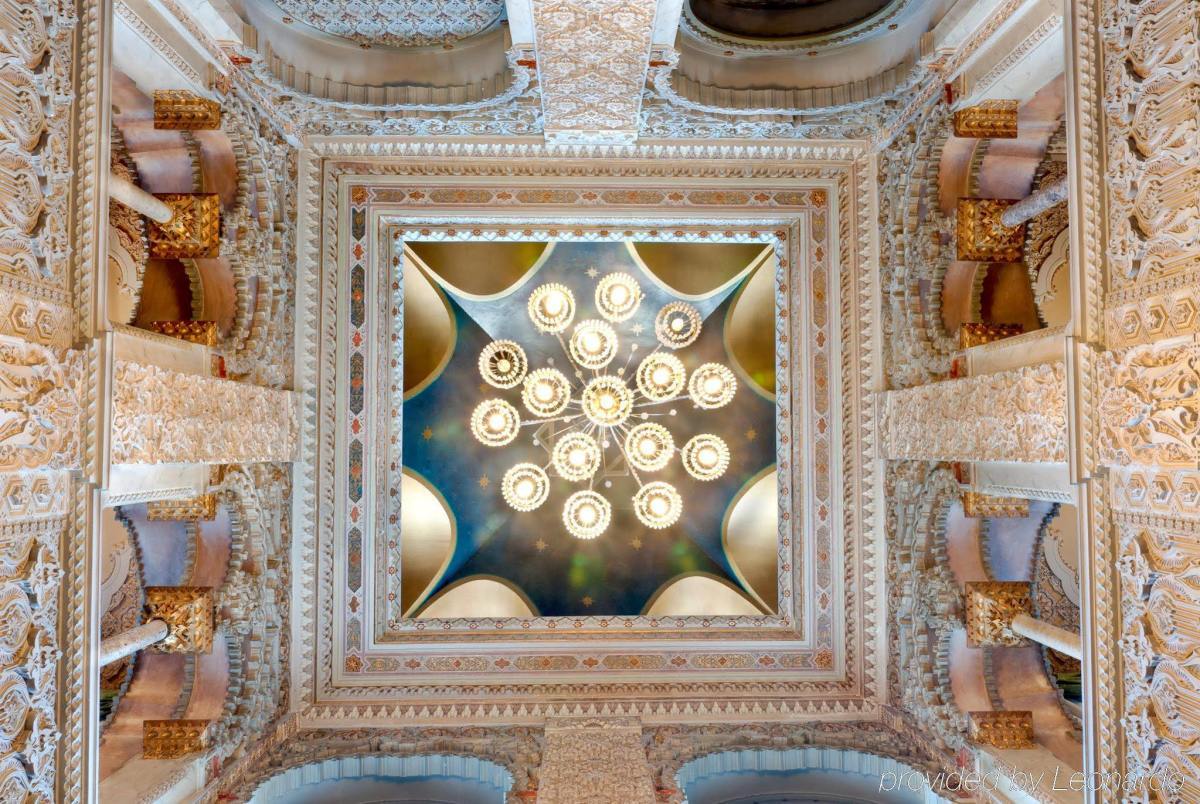 It is not easy to find information on Villa Crespi, I chose here to report the story that is written on the official website of the villa, which is now a renowned restaurant, included in the michelin guide with 2 stars. A unique experience to try!

In 1879, Cristoforo Benigno Crespi, pioneer of the cotton industry, commissioned the construction of this magnificent Moorish-style villa, immersing it in the greenery of a park that enjoys a panoramic view of his beloved Lake Orta.

Source of inspiration: his long business trips to the Middle East where he is captivated by the charm of the splendid Baghdad architecture.

The construction is entrusted to the architect Angelo Colla, a native of the heights of Lake Maggiore, to whom the client leaves full freedom of creative expression. Originally called Villa Pia, from the name of his wife to whom Cristoforo Benigno Crespi dedicates it, the dwelling then takes the family surname. The old title is currently legible on one of the entrance gates.

The works last 30 years and the result is a Moorish-eclectic masterpiece, unique in its style throughout the world, dominated by stuccoes and Arabic inlays; a marvel, that still today, takes your breath away.

The passing of time sees the succession of different owners, in the thirties of the twentieth century, it was bought by the Marquises Fracassi of Torre Rossano, becoming a place of residence for poets, nobles and rulers, including King Umberto of Savoy.

Starting in 1999, following a thorough renovation, Cinzia and Antonino Cannavacciuolo restored her Middle Eastern character, making her a reference point for Italian hospitality and a temple devoted to cuisine and good taste.

Thanks to the patronage of Cristoforo Benigno Crespi, the architect Angelo Colla, who started out as an ornamentist and decorator, has the opportunity to highlight his best qualities: a romantic scenographic taste and a passionate care for the decorative detail that allows him in the last years of his career to carry out a significant activity as a true independent architect.

The architect Colla realizes the Villa enriching it in every corner, from the majestic hall with splendid Florentine mosaic floor, to the ornamental walls that end on the ceiling with a starry sky in pure Moorish style, to the inlaid windows of a thousand decors and to the wonderful parquet floors wood. Finally, the imposing minaret, a reminder of the Arab architectural style, which has become one of the most recognizable and emblematic symbols of Lake Orta.

The restaurant is of a very high standard and entails an adequate cost, but it is a unique experience that will allow you not only to taste refined dishes but also to visit this splendid villa.

Not open to visitors

Perhaps few people know that, a stone's throw from Lake Orta, there are many craft microbreweries that can be visited...

Miami beach is in a fraction of Corconio, it offers a little sand laver equipped with canoes, paddleboats, sunchairs and beach umbrellas